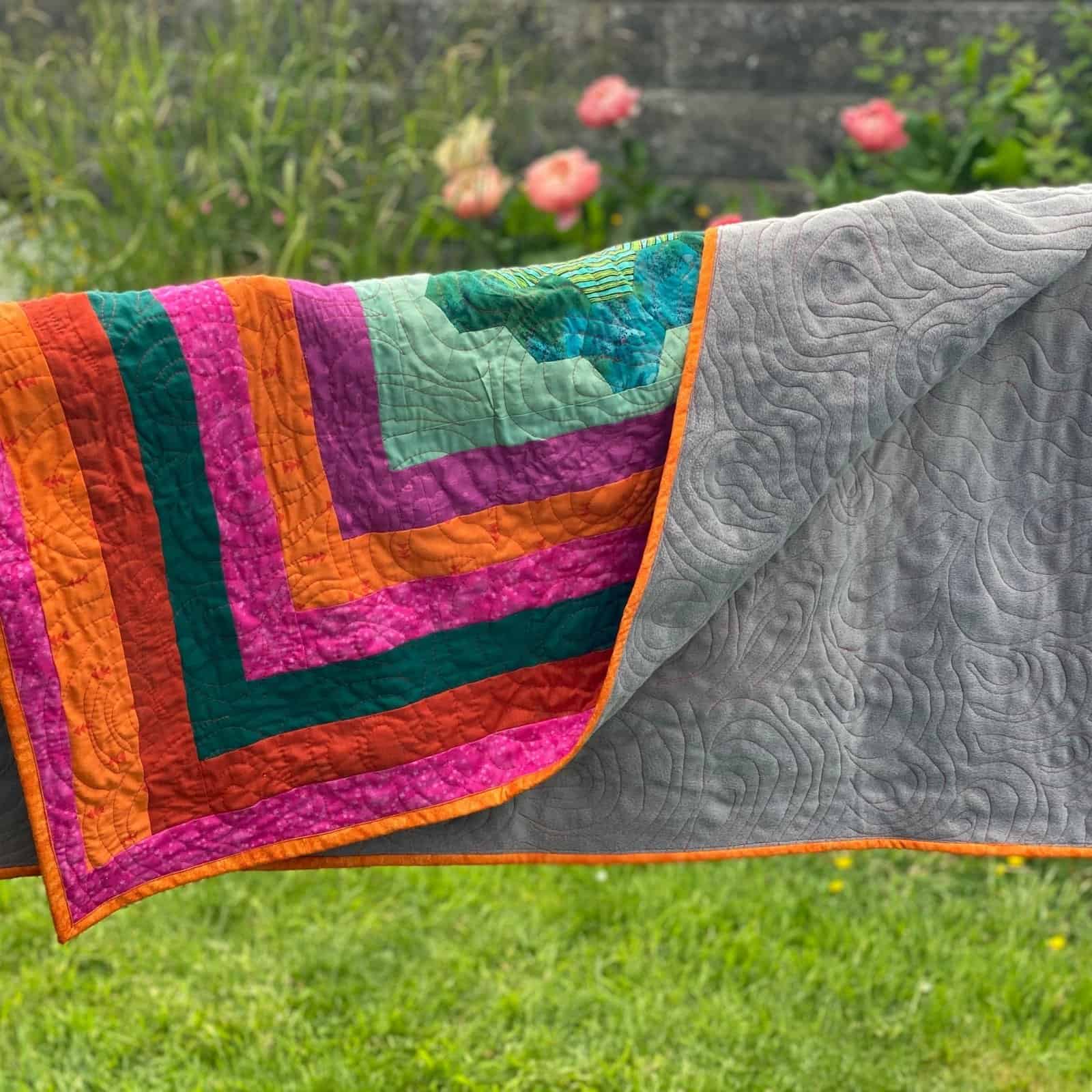 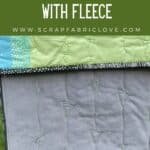 Recently I made my first ever charity quilts and the charity in question prefers their volunteers to use fleece for the quilt backing so I decided to have a go even though I’d never used fleece before.

Three different methods for using fleece for my quilt backs

Below I’ll give you my step by step as well as my impressions of all these methods. I’ve also talked a bit about whether or not fleece is actually an eco friendly fabric.

This post originally appeared on our sister site Upcycle My Stuff.

The three quilts are all closest to lap quilts in size but one is more of a baby quilt size. I made them for project Linus UK, which here in the UK is a community interest company ( a bit different than a charity but it is run by volunteers).

Project Linus also has branches all over the world including the USA and Canada. See the link above to my blog about sewing for charity where you will find country specific information.

The local branch of Project Linus that I was in touch with donates quilts to kids in the local sick kids hospital as well as women’s refuges, residential schools and other deserving places where there are kids and people in need of cuddly quilts as a warm gift to help them in their healing and recovery.

I didn’t actually use any quilt patterns for these three quilts. I started off with some patchwork hexie blocks that I bought on eBay. They were being sold by the daughter of a woman who has alzheimers and can’t finish her sewing projects.

You can see the video of my Patchwork Ebay Haul on YouTube.

I started off with different groupings of these blocks and then added sashing (for the wine coloured one) or multiple borders (the other two).

So the quilt tops themselves were pretty quick to sew together. I had been concerned that they wouldn’t be exactly the right size for what Project Linus needed, but the local coordinator told me they take quilts of all sizes.

What kind of fleece is best for quilt backs?

I didn’t have to worry about this question too much as the Project Linus Coordinator was very specific that they kind they like the quilts to be made out of is anti-pill Polar Fleece.

The anti-pill fleece that I bought was super soft, not too thick and clearly would not be bobbling – that’s what the anti-pill bit means!

So for all three of these quilts I was using this polar fleece instead of quilting cotton that most people tend to use on the back of a quilt.

The first quilt I attempted with a fleece back was this one with the wine and pink coloured blocks. It is a bit bigger than a baby quilt at 41″ x 57″.

For the front of the quilt, I used 6 of the patchwork blocks I had bought on eBay and added a sashing with some peachy cream fabric that I had bought in wide strips off eBay as well (I have an eBay problem!).

Once the quilt top was complete this was my process –

Step 1: Baste the Quilt Top to the Fleece Back

I used a spray baste for this. I placed a single piece of fleece right side down on the floor (any large flat surface will do if you don’t have the floor space) and centred the quilt top on the top right side up.

I used my rotary cutter to cut the fleece several inches wider on all sides than the quilt top.

I then turned around and rolled up the other half of the quilt and repeated this process.

It was much easier than my experience with spray basting traditional quilt backing and traditional batting – obviously because there are fewer layers of fabric to baste!

So just to be clear this quilt had no batting, so there is no traditional quilt sandwich – just the two layers of the fleece and the top of the quilt.

This was the recommendation from Linus Quilts – no batting. I asked some more and it became clear that they weren’t opposed to batting they just thought it wasn’t necessary to make it a cuddly quilt – the fleece was enough so they don’t want to ask their volunteers to pay for batting if it isn’t needed.

Step 2: Quilting with a Fleece Backing

I don’t always quilt my quilts the same way. I have in the past used a walking foot as well as free motion quilting. This time though I tried making things even simpler. I used a decorative stitch on my janome sewing machine that had a small leaf design on it. I thought that would tie in well with some of the motifs in the blocks.

I used a wine coloured thread that matched the colour of the fleece I had chosen for the back. So it blended in perfectly and the decorative stitches should up on the back as a texture rather than another colour.

I found quilting the two layers very simple and I just used my regular sewing machine foot and had no problems at all.

Using the decorative stitch also made the quilting super fast! I quilted the whole thing in just a few hours!

Now the colours in these blocks are not ones I use a lot so I struggled to find anything in my stash that was the right colour for a traditional binding.

So as the fleece was already cut wider than the quilt top and it has a nice stretch to it I decided to try my hand at using the fleece itself as the binding…thus the term self-binding.

I used the same decorative stitch I had used for the quilting to sew down the fleece binding. I slowed it down at the corners so I could fold the fleece into mitred corners. They weren’t all perfect I’ll admit but it didn’t look as stretched out of place as I expected it might!

The second quilt I made was slightly smaller than the first but still a smidgen bigger than a baby quilt – probably for a lap quilt for a school age child. It is 39″ x 49″.

The two blocks I started with for this quilt had some turtles and zebras as the central motif. I pulled out the greens and blues from the blocks and added several different sized borders from what I had in my stash. Would you call this a courthouse steps design? Anyway, it was super easy to do.

This one is actually my favourite of the three. For two reasons. One because I used batting, and two because of the simple quilting design I used.

Step 1: Baste all Three Layers of the Quilt

So for this quilt, I wanted to see what it would be like to use the fleece with regular quilt batting.

I felt like the cotton batting I had to hand would be far too heavy so I used a lightweight polyester batting.

This meant I had to baste both sides of course – the only downside to this method!

Step 2: Free Motion Quilting with a Fleece Back

I am still a beginner at free motion quilting but I like to practice when I can and I thought this quilt in particular would be good to try out a low-pressure design I had seen elsewhere.

You basically quilt in a straight or somewhat wavy line and then draw a simple shape – in my case a triangle – and go over it several times (but don’t worry about the lines looking messy!) and then continue on with your line and repeat at somewhat regular intervals. It’s kind of a naive drawing look – almost like a little kid was doodling on it!

I think it looks really effective on a kids quilt and I like how the contrasting green thread I chose shows up on the grey fleece back.

I just used a regular quilting needle – nothing special and no special thread either, just a regular cotton thread. I didn’t need to change my stitch length or speed or anything.

So even for free motion quilting the fleece back was super easy to quilt with.

As I was trying new things I thought I should try binding this one the regular way. So I found some black and white jelly roll strips in various patterns – I thought they worked with the zebras in one of the blocks.

I think this quilt is much cuddly and cozier with the extra layer of the batting. I also think it makes the quilting look nicer.

Obviously, it’s going to depend on what sort of climate you’re in whether or not you really need batting and the other two quilts are cozy as well but I think if I was making another fleece-backed quilt for personal use I would definitely be adding batting. But then I love a heavy quilt which is why I make so many denim quilts!

The top started off with just one of the hexi blocks – this one with multicoloured butterflies at the centre. I then added multiple borders in bright colours to match the butterflies and make the quilt that baby size.

The rest of the steps are much the same as the previous methods as this method is really a combination of the two:

When I first researched fleece it did seem like it was an eco-friendly fabric because most fleece fabrics are made from recycled plastic bottles. So that sounds great. Especially to somebody who likes upcycling like me!

But after I had made these quilts I attended a zoom quilt group where a spokesperson from Project Linus was speaking and one of the group brought up that when you wash fleece plastic microbeads are released into the water system and can cause issues for aquatic life and maybe even get back into our drinking water.

I did some googling and there is lots of evidence that a whole range of things we use in our homes has this issue including many shampoos and body washes. Fleece is included in this.

So should we not use it?

I’m still not sure as it is hard to weigh up the harm of washing fleece with some of the other processes used to make other alternative fabrics. I’m not a scientist or an environmentalist so I can’t give you a definitive answer.

However, I did find this filter (I have no affiliation with this company) that you can attach to your wash machine that is meant to filter out harmful plastics from entering the water system.

I was sad to find this all out about the fleece as I really liked working with it.

I’m kind of debating with myself whether it would be better if I bought good quality secondhand fleece blankets that other people are getting rid of and use those instead of buying new fleece. They will have been washed already and perhaps that damage is largely done and buying secondhand would decrease demand for new fleece…but I don’t know yet. I’d love to know your thoughts!

Final Thoughts on Quilting with Fleece

Finished quilts ready for pick up!

I found using fleece as a quilt backing fabric really easy. I was worried about stretch and worried it would be too thick to quilt and none of those issues came up for me.

I found fleece to be an easy fabric to baste as well as easy to quilt and I think it makes lovely cozy quilts with nice defined quilting designs.

If you want to know more about what charities are looking for donations of quilts and other items head to this post:

If you liked this post don’t forget to Pin it so you can come back to it later!