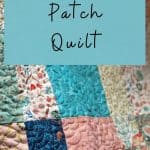 So what else am I going to do but go scrappy with it?

Below I’ll go through how I used scrappy neutral sashing and borders, a scrappy quilt back and a tiny bit of scrappy binding too!

The disappearing 9 patch blocks themselves are not so much scrappy, I had some 5″ pre-cuts which is what I used for these blocks.

It’s so bad but I can’t remember the name of the fabric! – if you know it do drop a note for me in the comments as I know readers will be annoyed by this!

Anyway I was searching around for what to do with 4 packs of 5″ pre-cuts and this is what I came up with.

I used this tutorial from Theresa Down Under to make my blocks:

I didn’t have enough of these blocks to make a good sized quilt, so I needed to add some sashing and borders….this is where the scraps come in.

I had a few different ‘neutral’ toned fabrics, kind of off-white colours, some with a light beige pattern on, but none of them were enough to use for the whole of the front of the quilt.

I decided to cut these scraps – some of them were fat quarters, some a little more and some a little less – into 2 & 1/2″ strips. I then sashed all the blocks and attached them together.

I then added a further 2 & 1/2 inch border around all the blocks but then I thought it was still a bit on the small side so I added two 3″ ‘neutral’ strips down each side and I used the leftovers from the pre-cuts and some neutral scraps to make the 3″ top and bottom border.

The 4 in a block squares were 4″ and the neutral pieces in between were 2″ x 4″. I then just used what I had left to make the borders reach to either edge!

Basting has not been my strong suit since I started quilting. I tried the spray stuff for another scrappy quilt and it didn’t go particularly well.

I think it was a reader who suggested that I try spraying my quilt top with water and then ironing it down on to the batting as a basting technique.

So I did that this time but I just didn’t have enough faith to leave it at that so I ALSO pinned it.

It was a pain to do, but the combination of the two methods definitely worked better for me than spray basting.

For the back of my disappearing 9 patch quilt I used one larger piece of teal fabric and three other pink pieces I had leftover from other projects.

I really like the way the back turned out myself.

Because of some of the shapes in the patterned fabric I decided to do an all over quilting design that was a bit of a ‘leafy’ or ‘floral’ look. I’m sure there is a technical term for it but I don’t know what it is!

Given I haven’t actually done that much free motion quilting before I think it turned out okay and it was a pretty forgiving design to choose too!

I used the trimmings from the back of the quilt to make my binding strips. I had a lot of the teal colour so I started with that but I knew before I started I probably wouldn’t have quite enough so I added in some of the pink colour.

However, despite using my favourite Melanie Ham machine binding tutorial I still somehow ended up short on the binding – twice!

I was sat there at the final hurdle having to cut the strip open and sew on one more piece and then one more piece again before I could get it to lay flat. Thus the funny teal pink teal pink pattern at the bottom. I don’t actually mind how it looks but it was super frustrating at the time!

The finished quilt is 61″ x 77″, so ever so slightly larger than a full/double size.

This quilt is destined to be a Christmas present but I won’t say who for! Hopefully they won’t see this post or if they do they’ll froget by the time Christmas rolls around!

If you like’d this post, don’t forget to Pin it for later!