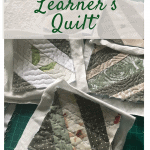 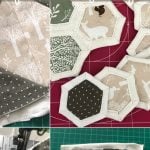 I am not a patient person. I like to go in to a new craft or project all guns blazing.

This means I often take on more than I can chew and end up with 6 or 7 half finished projects lying around my house. 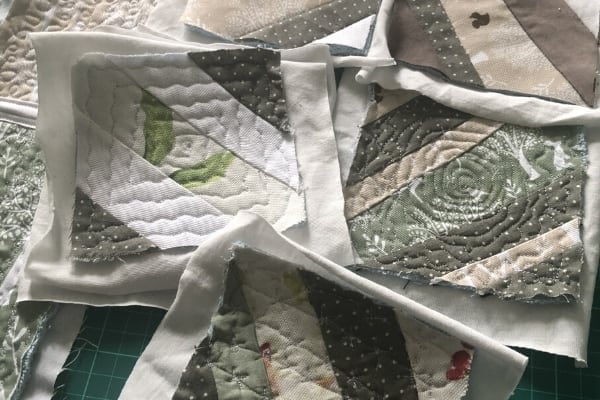 I usually finish them but sometimes it can take me a while!

So when I decided to take up quilting recently I also recognised that I needed to do something to stop me from starting off with something overly ambitious!

Rather than picking a quilt pattern that is already out there (because no doubt I would pick one above my skill level!) I decided I needed to come up with a way to let me learn lots of new techniques and also satisfy my need to get started on something straight away.

The first thing I did was a mini-quilt as you go keychain. But let’s face it that was mini – I wanted to do something bigger.

So I decided to make a quilt-as-you-go ‘Learner’s Quilt’.

[If you want to skip straight to the finished quilt head to Part 2 here].

Update: Since writing this post and finishing this quilt I have also tested 7 Quilt as You Go Techniques and made a post and YouTube video about them.

Part 1 & Part 2 have also been combined into one huge post on our sister site Upcycle My Stuff.

What is a Learner’s Quilt?

Now I don’t know if this is a real term or just one I am making up but for me this is what it means:

I am going to make individual quilt squares/blocks using different techniques but all in a quilt-as-you-go way so that I can join them all up at the end to make a sort of a sampler quilt, but one that has not been planned ahead of time.

Now I’m going to emphasise – this is a ‘Learner’s’ quilt – so the blocks will not be perfect.

I would suggest that if you are a seasoned quilter yourself you might not be able to handle the randomness of what this quilt is going to become! You’ve been warned! But I am seeing that as part of my learning journey.

For me this exercise is going to be about trying out different techniques and block styles without having to commit to making tons of them at a time and then picking and choosing which styles I want to revisit and improve on in future projects.

I could of course practice different quilt blocks and styles with scrap fabrics and put them in a drawer or a box as a reference but I personally feel more motivated knowing I am going to put them all together in the end.

As you can probably tell by the name of the website I like sewing with scrap fabrics, remnants and offcuts….I am a little bit addicted to buying fabric this way actually.

But for this project I’ve actually decided to mainly use two large fabric remnants that I have leftover from decorating my son’s room.

They have the same print in two different colours, beige and green. I designed the print myself and I overbought the fabric when I ordered it.

I covered a toy box seat with the green and made a fabric pin up noticeboard and a bean bag with the beige.

I can’t remember how much I bought but it was at least a metre or maybe even two of each. So I have too much leftover and not really much I can think of doing with it.

To be honest I’ve kind of fallen out of love with this fabric so I figured I should just use it up for this. And when it’s finished the quilt can live in his room too if he wants it.

I also thought that if I used mostly these two fabrics plus some other coordinating scraps the quilt might end up looking vaguely cohesive even if the blocks themselves wouldn’t comfortably live together otherwise.

I have this other muddy green polka dot fabric that I covered some dining room chairs with and again overbought. I’ve been using it in little projects ever since but I always seem to have small bits left – so I plan to use it up in this project as well!

For the batting I am using old cotton towels. I didn’t want to race out and buy expensive batting for what is essentially a practice project.

I am cutting the backing fabric a bit larger than each block in order to fold over and bind each block individually (see below for the technique I’m using).

I’ve choosen some wildly inappropriate stretch cotton from my son’s old cot sheets for the backing fabric. I know this is not going to be the best to work with but again I don’t want to cut up some really good fabric for a practice project and the main thing I want is to give the quilt a harmonious look by having the backing fabric to be all the same colour – so stretchy white it is!

There is no rhyme or reason to the types of blocks and techniques I’ve started with, these are just blocks that appealed to me from Pinterest, Youtube or other blogs.

The first one I started with is a pretty classic QAYG block. I used strips of my fabric in different widths, sewing right sides together through the top batting and backing all at once.

I then pressed open each new strip and repeated until the whole block was finished.

Finally I pinned back the backing and squared up the edges of the batting and top layer.

The method I used was just a larger version of what I did for the QAYG Keychain I mentioned above.

I really like how fast and easy this method is and if I had enough scraps that complimented each other I could totally see doing a whole quilt like this.

However I feel like if I tried this with a truly scrappy quilt – as in just whatever I had – it could start looking awfully messy.

Below are some more of my scrappy strip blocks – some of them I came back and had a practice free motion quilting after the fact (more about that below).

Next I found a tutorial on Flying Geese so I decided to try that.

Obviously this method took a little more concentration than the scrappy strips blocks but I think for a first timer I did okay.

I used the ‘no waste method’ from The Spruce Crafts.

I made 8 ‘geese’ (?) and I put 4 of them together into these two blocks – which I think might mean they are square in a square blocks not flying geese blocks – is that right?

The other four I joined together into this long skinny and fairly wonky block!

I already know just from doing this block and some other sewing projects like bag making that I fall down on the first step – the cutting.

I am getting better, but I’m impatient, and I resent having to change my blade so often so I just end up hacking at the fabric!

I am also left-handed. That’s not an excuse but it just means I have to learn a slightly different way of doing things to what I see others doing.

After the realisation that precision cut blocks were not going to come naturally to me I decided to try some quilt as you go hexagons using the templates I bought from Daisy & Grace after seeing them on the Missouri Star Quilt Company’s YouTube Channel.

I bought the smaller 1 & 1/4″ size instead of the larger one as I figured I’d get more scrap fabric hexis out of a smaller size.

Here are my first batch of hexagons. I haven’t decided what the final shape of this block will be when they are all sewn together but I do have the half hexagon template too so I can square it off when I feel like I have enough so I can join it to the other blocks too.

They did come out a little wonky – anyone recognise a theme? But I did try a couple using proper quilting cotton rather than stretch cotton for the backing and they did turn out a lot crisper so I think this is definitely one I will come back to and try to make something larger using just these hexies and the proper type of fabric!

This probably seems like a strange place for a beginner quilter to start but I just really wanted to try it.

I got a free motion quilting foot for my birthday (it was on my Amazon wishlist!) and so I though – why don’t I just cut out a few lengths of the learner quilt fabric and have a go?

It took me ages to get the tension and stitch length right so that it actually started stitching – p.s. it helps if you but the foot down! Duh!

I think I probably have my tension too high still – I had it on 3. I also am probably not travelling enough doing the quilting as my designs are very dense.

In any case I really enjoyed it and when I’d finished my first two panels I went ahead and re-quilted some of the scrappy strip blocks just to have another practice.

It has definitely wet my appetite to try more free motion quilting.

I think in the end that is what this Learner’ s Quilt is going to do for me – show me which quilting techniques or styles I like that I want to come back to to learn more and improve on.

I also couldn’t resist joining these two blocks together. Even though I haven’t decided how I will lay out the rest of the blocks I just wanted to see how the QAYG binding method I am planning to use is likely to look.

What I did was sew the backing fabric together wrong side to wrong side just along the edge of the quilted block. Then I folded over the raw edge twice and sewed down either side. I used the youtube video below as the basis for my technique – though of course my cutting and squaring off is miles less precise!

I have now completed my Learner’s Quilt – yeah! – you can find Part 2 that includes more quilt blocks and how I assembled my quilt using several quilt as you go methods here.

If you want to come back to this post later so you can see how my Learner’s Quilt turns out don’t forget to Pin it!