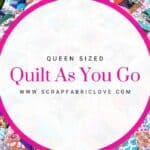 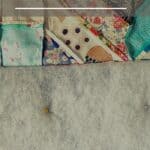 I finally finished my giant queen size quilt as you go scrap quilt!

I’ve name it ‘the beast’ because it seems like such a huge quilt compared to the mostly throw sized quilts and baby quilts I’ve made before. 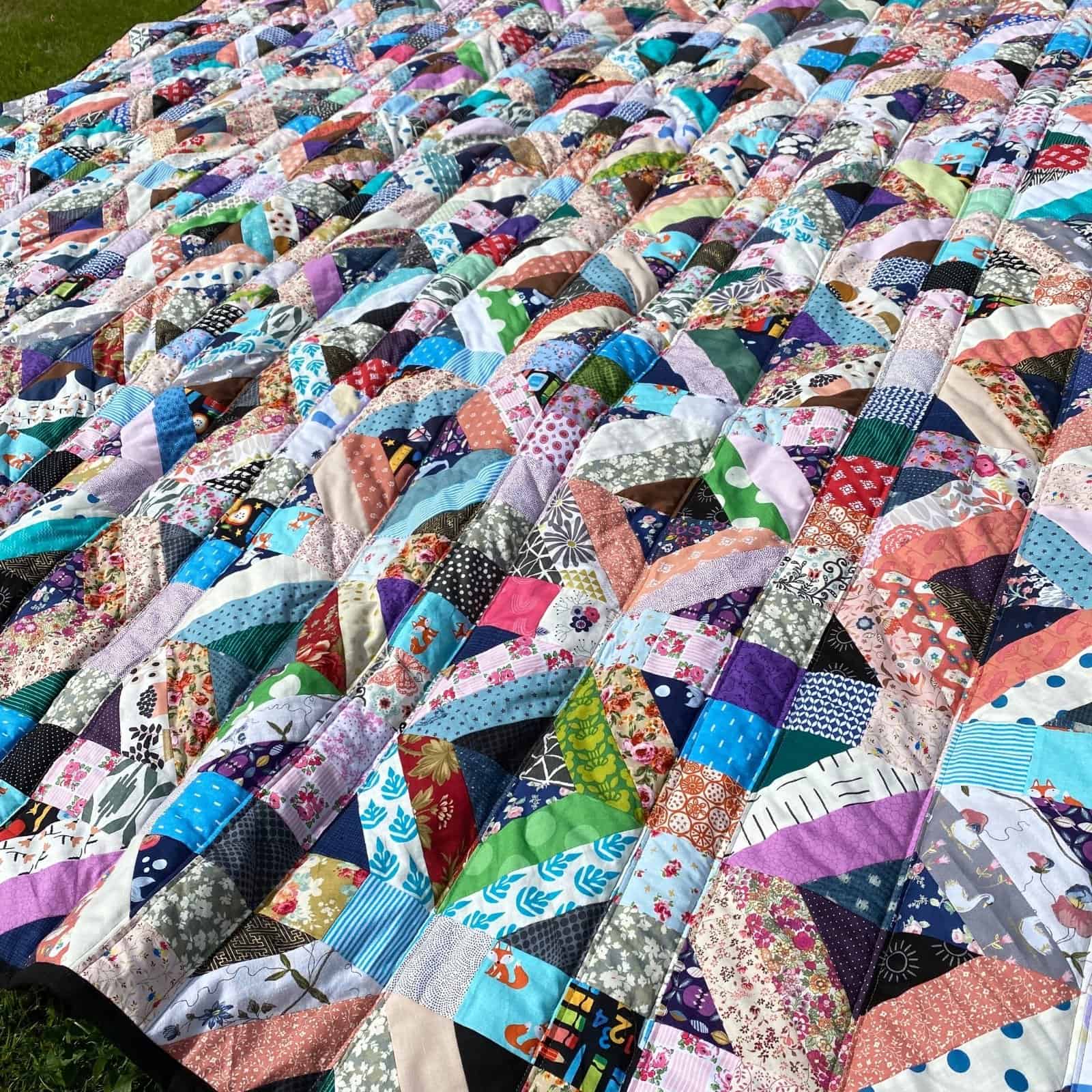 In order to be able to quilt it on my domestic sewing machine, I knew I had to do this one quilt-as-you-go style.

So I started off by doing some research into different quilt-as-you-go methods – I tested 7 different ways in all!

I was looking for a way to join larger quilts all by machine. It seemed to me like so many quilt as you go methods involve hand sewing the back shut and for a quilt this large I just couldn’t face it!

I finally found one I thought would work for this quilt – quilt as you go in sections!

I think this method will work for all skill levels from experienced quilters to beginners embarking on their first bed quilt.

It involved quilting the quilt in four long sections – columns essentially – and then attaching them together with the quilt as you go method.

Quilt as You Go Method

Below is a video I did explaining the quilt as you go method I used for this quilt. I’ve also tried to explain in words below for anyone who doesn’t like watching video.

There was nothing different in the way I pieced my blocks.

The only difference was I didn’t sew all my rows together.

The queen sized quilt for this pattern – the Rojas Quilt by Wisecraft Handmade – has 80 blocks.

Instead of sewing the rows together I sewed the columns down and joined them into four sections of 2 by 10 blocks (so 20 blocks total for each section).

I laid everything out on the floor to decide what order the columns would go in and then labelled them by number (see above).

I usually use cotton batting or 80/20 batting.

I could have just cut some standard quilt batting into the size of my columns but I decided instead for this project to buy some 27″ wide polyester batting from Amazon – I bought mine in the UK and I couldn’t find the same thing on Amazon US but I found some that were pretty close!

It came on a roll so I just needed to unroll it to the length of my column and cut – so much easier.

This size of batting is probably designed for upholstery use but I checked the reviews and there were plenty of folk saying they had used it successfully for quilting so I decided to give it a go.

How to Join Quilt Batting Pieces – Use your Leftovers!

I basted the backing, batting and column of blocks the same way as you would a whole quilt – so I didn’t get out of the kneeling on the floor using this method.

You could of course make your sections much smaller than mine so you can baste on a table top without bending over but you will then need to contend with more joining lines – pick your poison as it were!

Because I wanted to disguise my quilt as you go joining lines that I was going to do by machine I decided to do straight line quilting with my walking foot at fairly large intervals.

Because of how far apart I was putting my quilting lines – approx 4″ – I had plenty of space to maneuver when joining my sections. If you want to do more dense quilting make sure you leave at least an 1″ from your raw edge on either side of your sections so that you can comfortably sew the sections together.

After quilting each section I trimmed both the backing and batting to be exactly the same size as the quilted top.

Once all four sections were quilted and trimmed (see above) I pinned back the batting and backing with straight pins and joined the middle two sections first.

I just sewed the two quilt top layers together right sides to right sides with a 1/4 inch seam allowance the same way you would if you were joining rows for a full quilt top.

Once the top sections were joined I placed the two sections on the floor and ironed open the seam down the middle. I then trimmed the batting so it just touched the opposite sections batting.

I used steam a seam down the join and fused in place.

Lastly, I folded the raw edge under one side of the backing fabric and pinned it over the raw edge of the opposite side.

I then took it to the machine and joined the backing together by sewing just inside the folded edge – basically as close as I could get to the edge so I didn’t have any flapping fabric. Very similar to how you would topstitch machine binding onto the front of a quilt.

I then finished by sewing that ‘second quilting line down the front on the opposite side of the seam to where the joining line was so that it looked like my straight line quilting was continuing in the same pattern as the other sections.

I then repeated the same joining process for the other two sections on either side of the quilt.

I started in the middle so that I never had to feed the entire quilt through my machine which of course is the point of the qayg method.

The quilting process was certainly easier than it has been for the large quilts I’ve done before (which were closer to large throws or twin sized not as big as this one!).

Above is the back of the quilt – I had to use two different navy blues for the back as I didn’t have one big piece of backing fabric. So you can see exactly where the middle join is and you can count the quilting lines to find the other two joining spots!

NOTE: Although this method turned out well and was easier than the other methods I considered if I was doing this quilt again I would use this quilt-as-you-go method which I discovered about a year or so after this quilt was made.

I think it turned out pretty well – my only issue just now is that it doesn’t fit in my washing machine! So I will need to take it to the laundromat to clean it!

Have you made bed-size quilts using quilt as you go? What method did you use for your qayg quilts? I’d love to hear what worked for you!