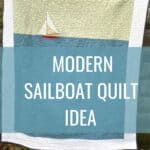 I made a sailboat quilt for a good friend of mine as a gift last Christmas (she lives by the sea) and it was one of the quickest and most visually striking quilts I’ve ever made.

I didn’t use a quilt pattern I just used one sailboat quilt block pattern and built the rest of the quilt around it using fabric remnants and offcuts. 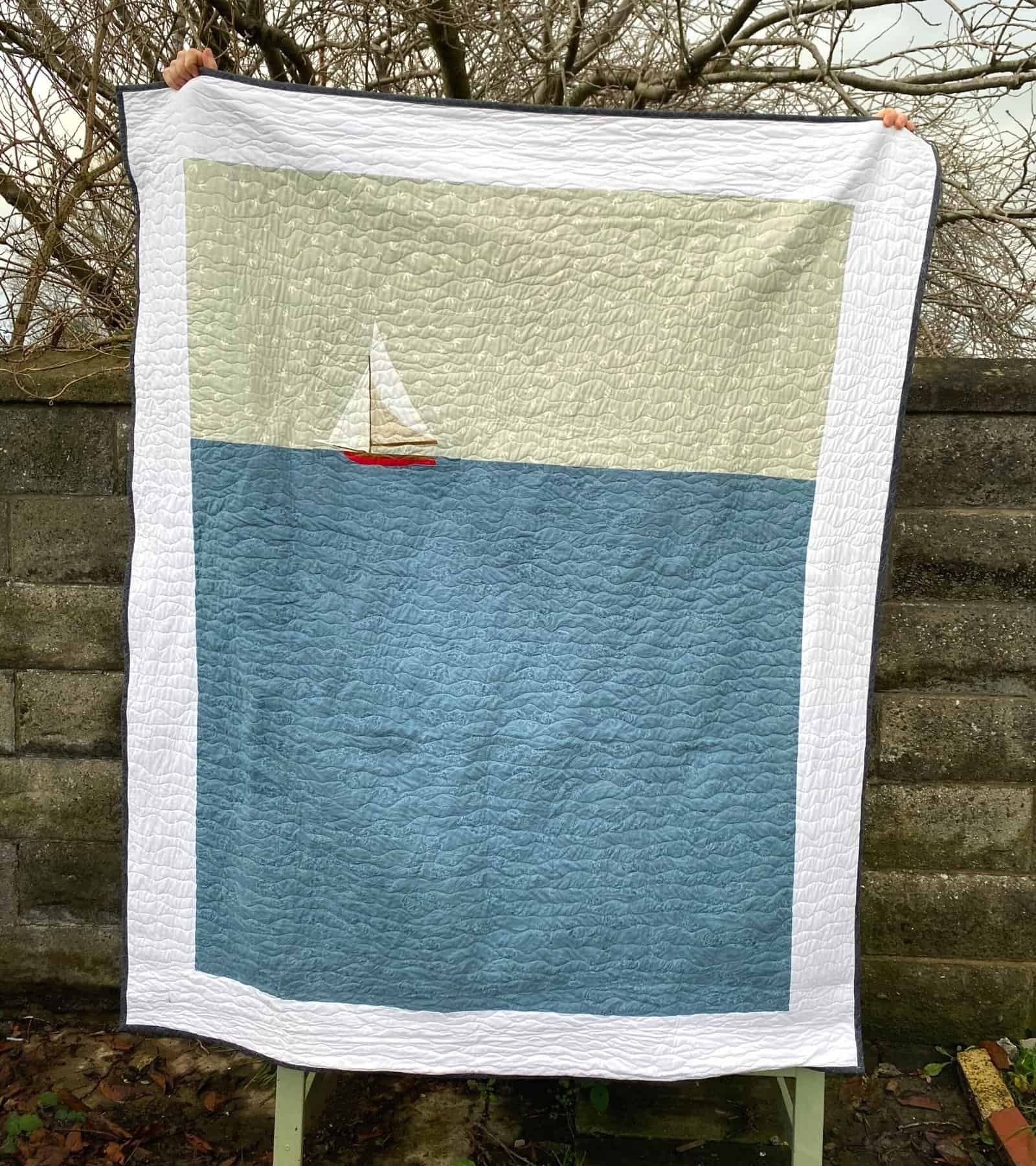 I’ll do my best to explain how I did it so you can try it too. I’ve said it before and I’ll say it again – sometimes the simple quilts are the most successful ones!

I based this entire quilt on one foundation paper pieced sailboat block.

I started my quilt this way because when I searched for a nautical quilt pattern, I just couldn’t find anything that I really liked but I did find this sailboat block so I figured I’d have a go at adding to it!

I purchased the pattern on Etsy from Ink Torrents who don’t seem to sell on Etsy any more (I have since found the pattern on their own website here) but you could start your sailboat quilt with any sailboat blocks really.

The key is that the block has a division between water and sky at either side of the block.

Here are a few others I found on Etsy that fit this description:

So you could use a different sailboat block to the one I did or you could make a less detailed sailboat using half square triangles and rectangles (I don’t have a guide on that as I didn’t do it that way but I have seen it done!).

I can’t give you exact yardage measurements for this quilt but basically, I had bought a bundle of someone else’s leftover blue and navy fabrics on ebay.

Most of it was Janet Clare (who designs a lot of nautical fabric). The bundle included lots of strangely cut pieces of her fabric that looks like waves – I’m sorry I don’t know the exact fabric name!

I had also bought a large remnant elsewhere that was pale grey with white seagulls on it.

For more on how I shop for quilting fabric including scrap bundles and remnants check out this post:

I confess when I give quilts as gifts they are usually throw quilt size, which also means they might not even be a super standard size at all.

They are just the size they end up and then I tell the recipient to use it to snuggle up with on the sofa rather than putting it on a particular bed size!

So I basically eyeballed my pile of bird and wave fabric remnants and decided it was enough to make a lap quilt for a sofa.

Building the Quilt around one Quilt Block

My first step was to make the sailboat block.

Once the FPP block was finished I measured the size of the finished block. I think it was around 12″ plus the seam allowance.

Next I measured how much of the block had the ‘water’ in it and how much had the ‘sky’. I then pieced strips to either side of the block that were approximately 2/3rds sky and 1/3rd water.

So this is not a quilt pattern where I can give you set block sizes but rather a bit of a DIY guide to building up around a hero quilt block as it were.

Once trimmed to the same height all the way across that became a section of the quilt that just needed to be added to.

I pieced the waves fabric remnants – some were strips, some were larger chunks into one big piece and added in on below the sailboat section.

I then pieced the seagulls fabric remant (there was less piecing for this section as it came in on belong piece anyways) and added it onto the top of the sailboat section.

Finally, to finish my quilt top, I added a large white border to make the whole quilt a little bit bigger and to frame it up. The border fabric was plain white – also bought as a remnant which is why it looks so oddly pieced with extra seams!

The whole quilt ended up at 63″ x 79″ – so not a standard size at all but you could of course aim for a final size and make it whatever you want with this way of ‘building’ a quilt around a block.

The back was also pieced starting with one nautical fat quarter from that same ebay bundle of Janet Clare fabrics and then building around it log cabin or courthouse steps kind of style.

The rest of the back is white because I didn’t want any coloured quilt back to show through on the seagull background fabric on the front of the quilt as it was very light.

So the oddly placed pieced section is on purpose to keep it contained on the opposite side of the darker fabric of the waves.

The quilting was quick and easy for this quilt too! I just did wavy lines across the whole thing which look like waves in the water and wind in the air! Simple!

Quilts usually take me around a month to complete but this one took about a week start to finish including quilting and binding!

I hope you have enjoyed this blog post and it has helped you think of ways you can start with simple quilt blocks and build bigger modern looking quilts with negative space.

This technique doesn’t have to be used just for sailboat quilts of course. You can use any beautiful quilt block that you want to highlight and make a quick and easy quilt in no time!

If you liked this post and you want to return to it later don’t forget to Pin it!