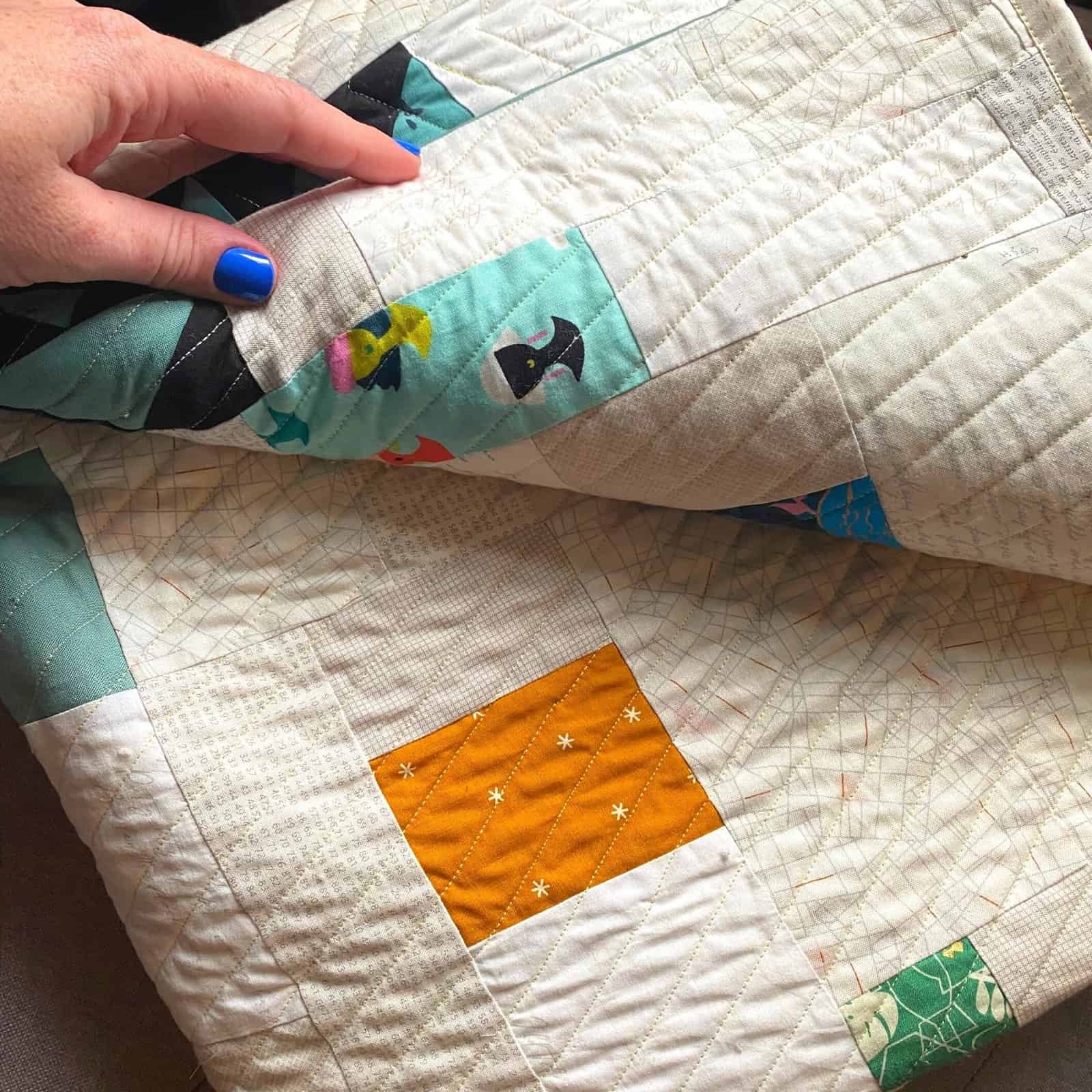 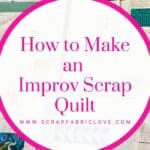 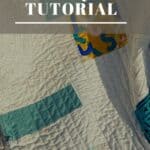 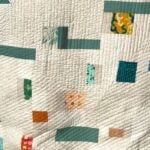 This modern improv scrap quilt was a super quick make. The quilt top took me just two and half evenings to finish.

I’ll show you how I got started and how I put it all together. This isn’t a pattern so much as a guide on how to make your own unique scrap quilt.

There is also a video tutorial that visual learners will probably find easier to follow (see below!).

As this was an improv quilt I wasn’t super set on the exact size it would finish when I started but I knew I wanted it to be a throw quilt.

It was made as a wedding gift for a friend and I wanted them to use it on their sofa when they are watching tv, so I was aiming for that roughly 50″ x 60″ kind of size.

You can aim to make your version whatever size you like!

I knew I wanted to make my friend a modern quilt. But I also knew it had to be quick as the time for the wedding was approaching.

So rather than looking for a pattern made up of lots of intricately cut and pieced blocks I decided to design my own free-form or improv-style quilt.

I started by laying out some low volume large remnants on the floor. To make out the basic background of the quilt. I didn’t keep them like that but this was just to get a rough idea of how much fabric I needed to make a quilt top the size I wanted to make and to get a rough visual of what I would do.

On top of the low volume fabric I just randomly placed some of the Ruby star scraps from my scrap bag. I also put down a few small ‘orphan block’ flying geese blocks that I often make with scraps to see if I could use any of them in the quilt.

When I saw them next to each other I liked the kind of teal color ones I had – they seemed to go with some of the ruby star scraps and I knew I had another little scrap of a similar teal colour that I could use in the quilt as well.

Although I laid my scraps and orphan blocks out in this way, I wasn’t deciding on exactly where everything would go I was just getting a rough concept of what I thought looked good together.

I started piecing my quilt ‘blocks’ (if you can call them that), by taking some low volume strips (some of them were Jelly Roll strips, some of them were just leftover from other things) and I started chain piecing them with the Ruby star scraps as well as the flying geese blocks.

In essence, I was trying to add the low volume fabric to one side of each of the scraps or oprhan blocks.

It didn’t matter if it was the long side or the short side, I was just grabbing them and basically putting them wherever they fit on the strip.

Rather than showing photos of the steps here I think it is easiest to watch the video tutorial to get a better idea of how the quilt block units are formed (the instructions for piecing start at 02:14):

Once each scrap had been attached to a low volume strip, I trimmed and pressed each unit.

I only trimmed the one side at this point – the side where the seams joined between the low volume and the scrap – so I could then sew on to that.

I didn’t trim them all down to a set size, I just tidied them up a bit and moved on to the next step.

Basically, you just need another straight edge to sew on your next piece of fabric.

Next I took one of the larger low volume remnants, I didn’t measure it so I don’t know exactly what size it was. I didn’t even iron it. I just cut it along the fold lines as I had it stored. I was looking to create pieces of fabric that were at least long enough to sew on to my existing units.

I cut them much wider than the initial low volume strips but you can make them as wide or narrow as you like. I was prepared to just keep adding fabric to my units until the whole quilt top was the size I wanted it to be – this is a great stash buster in that way!

I then repeated the process of trimming and pressing and repeated the same again on the remaining sides with other large low volume remnants.

So eventually the aim is to have the colored scrap surrounded on three sides by your background fabric whether that is all one fabric or lots of different remnants like mine.

Then you will have these units or blocks and it becomes a kind of jigsaw puzzle operation of trying to fit them together.

The aim at this point is to build and build into larger sections that can be joined to eventually make the quilt top.

To do this you will start by combining some of the smaller units you have made to each other and then trimming off one side or another to make a straight edge that will allow you to join it to another group of units.

If something doesn’t completely fit, add a low volume strip of fabric, or a small scrap of colour. Just add or trim away until you can make your larger units fit together into sections.

This is the fun part! You can see how mine came together over time in the video tutorial above.

I eventually ended up with three large sections that got joined together and then the whole thing was trimmed and squared up after I quilted it to the fleece backing.

I pieced my batting for this quilt using my favorite ‘franken-batting’ technique and then did some wonky straight line quilting to join the quilt top, batting, and fleece backing.

I used the rest of the low-volume strips I had to make a scrappy low-volume binding.

I love how it turned out and I think it makes a nice modern wedding quilt.

I’d love to know if you try this technique and see how your quilt turns out! I’m sure it will look completely different to mine – that’s the beauty of this – every quilt will be one of a kind. Tag me on Instagram @scrapfabriclove to show me your creations!