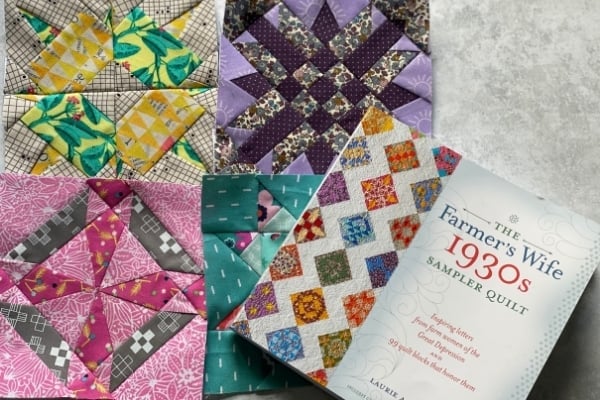 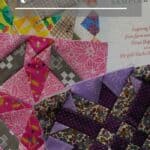 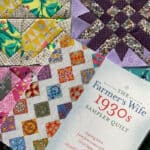 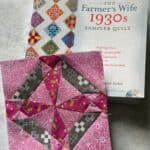 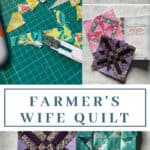 I started the Farmers Wife 1930’s Quilt back in November 2020, I was working at it regularly for a while and then I dropped the ball! I’ve since picked it back up again and I’m aiming to finish this quilt this year!

The post below is from back when I started this project and explains how the project came about and what I was hoping to get out of it as well as images of my first few blocks.

Since re-starting this project I have filmed Part 1 of my Farmer’s Wife Quilt 1930’s video that explains my scrappy approach to the quilt, as well as showing how I go about constructing the foundation paper pieced versions of the blocks.

As you might know, I’m new to quilting. So deciding to take on the Farmer’s Wife 1930s Sampler Quilt probably doesn’t sound like the place to start (there are lots of tiny pieces in some of those blocks!).

But one of the things I have done recently to expand my knowledge and make some quilting friends is to join a local quilt group here in Scotland where I live – and that’s how this has all come about.

The quilt group I joined is called Thistle Quilters, and as well as the larger group they also have smaller ‘house groups’ – although as its 2020 no one is meeting in any one’s houses at the moment!

Anyway I am in a small whatsapp ‘house’ group that also meets over Zoom once a week and everyone has been very friendly and welcoming to me although I’ve only ever met one of the members in person!

Everyone works on their own projects but it seems like often enough someone suggests doing something at the same time – essentially an informal ‘quilt along’.

I was too late joining for their last one – the Tula Pink 100 Blocks, but I’ve decided to take part in the latest one – the Farmer’s Wife 1930s Sampler Quilt.

If you haven’t heard of the Farmer’s Wife Quilt before, it is basically a collection of sampler blocks put together in a book along with letters that Farmer’s Wives sent into a farming magazine.

It’s this second book that my little quilting group is following.

You can construct the blocks a number of ways.

There are templates in the book you can photocopy and cut out and the book has cutting and piecing instructions.

The book also comes with a CD that has all the printable cutting templates as well as templates for Foundation Paper Piecing – this is the way I am making my blocks.

In our little house group there are several of us following along using Foundation Paper Piecing, a couple doing traditional piecing and even one valiant quilter who is piecing her blocks by hand!

Now when you do Foundation Paper Piecing, unless you are super precise with your cutting you are going to end up with more small scraps.

So in order to not be left with another mini scrap pile each time I complete a block for this project I have been making a point of using those scraps to make more of my 3 & 1/2″ Scrappy Quilt Blocks.

Those ‘mini-quilt blocks’ then just get popped away into my plastic box with the other scrappy blocks to be made into a quilt in future when I have enough!

As far as the book itself goes it is gorgeous. It has lovely bright colours and it’s all set out very attractively inside.

There is a colour image of each block alongside a letter from a Farmer’s Wife. Most of the letters are fairly upbeat so it is a nice comforting read as you follow along with the letters as you make each block.

There is also a section of course about piecing the blocks and assembling the quilt itself in various sizes (more on that below).

My only quibble with the book is that the printable templates come on CD. I don’t know about you but I haven’t had a CD-Rom drive in years!

In fact, most of us don’t have one. You can buy external CD-Rom drives of course but that’s an extra expense on top of the price of the book.

What our little group did was make sure every member had bought the book first and then one member who did have a CD-Rom drive downloaded the templates and emailed them to those of us who don’t have one.

Obviously she is trusting us not to distribute them further and she wouldn’t have sent them to us if we hadn’t already purchased the book (and therefore technically owned a copy of the templates – although locked away on the CD!).

If I hadn’t been part of that group and heard about that solution to get the templates I might have been put off buying the book because of the need to also buy a CD-Rom so I have to say I’m surprised the publisher hasn’t moved with the times and included a download with purchase instead.

If you make all 99 blocks and the accompanying recommended background fabric in half-square triangles to put the blocks on point you will end up with a Queen Size Quilt.

I think that is roughly the size we are all aiming for in my group but I know already there are a few quilters in our group who are sashing their blocks as they go so they might end up with a different layout and size.

I haven’t decided what I will do as far as sashing or background so I’ll leave that to the end but I am determined to make all 99 blocks…..so far I’ve made 4! So I’ve got a ways to go!

This was the first block I did. Corners not perfect even with the paper piecing but I’m not an un-picker usually (unless it’s really dire!).

Here is the block along side it’s scrappy ‘child’ block.

This is the second block, called ‘Aimee’ and I really like the colour combo of this one, I think it pops a bit more than Block 1.

And the photo below is Block 2 and the two scrappy 3 & 1/2 ” squares I made from the leftovers.

I have to admit this block took me ages – like two evenings I think.

A lot of the other women in the group were complaining about the amount of small pieces too!

I didn’t actually think it was super difficult, it just took some concentration and some time.

And here are the mini-blocks I made from the scraps.

After Block 3, this one was a welcome relief with its slightly bigger pieces!

I ended up with quite a few scraps from this block so I got 3 scrappy mini blocks out of it too.

Most of the women in my little virtual quilt group are using more traditional fabrics, some liberty prints and some are going for very clear colour pallets like brown and maroon. Very in keeping with the 1930s origin of the blocks and the letters.

I of course am attempting to make most of my blocks using scrap fabric and I don’t have a whole lot of these types of fabrics.

Although I did find one liberty fabric scrap from a bundle I bought off someone else that I used in Block 3. It was touch and go as to whether I was going to have enough to finish the block!

Given that I’m working with what I have, I’ve decided to make a more colourful version of this quilt.

I’m going bright and I think in the end there will be a sort of rainbow theme to my quilt.

I’ll be dictated to a bit by what scraps I have but I am trying to make each block in a rough colour family, so far Teal, Pink, Purple and Yellow.

The vague idea I have is to have either sections or rows in the layout that have different hues of the same colour and then move on to another colour as you move along the quilt…we’ll see how that goes!

Want to Quilt Along with me?

This is an informal quilt along with my little local quilt group and as much as I’d love to invite you all to join the group itself, I’m the newbie so I think I might get in trouble for that!

But- if you fancy quilting along with me there is still plenty of time to catch up (see my update below – seriously…plenty of time!!).

I’d love to see your take on the blocks! Tag me on Instagram @scrapfabriclove so I can see your photos of your Farmers Wife 1930s Sampler Quit Blocks.

Then some of the folk in my little group raced ahead and some abandoned it so I lost the motivation for this project too and it became one of my UFOs (unfinished objects)!

I’ve since done a cataloguing exercise of my quilting WIPs and UFOs and I’ve decided to get started with this quilt again!

See the video at the top of this post for the latest on my progress with this quilt!

Let me know if you are doing it too!